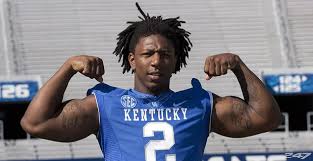 Back in August there seemed to be about three people on the planet who had high expectations for University of Kentucky football.  One of them was Mark Stoops.  A good part of Stoops’ optimism centered around senior outside linebacker, Alvin “Bud” Dupree.

Mel Kiper, never one to be on time for the party, recently added Dupree to his big board of top 25 players.  However, as Mel says, “Alvin “Bud” Dupree is a player I’ve known about since he enrolled at Kentucky. He’s the kind of kid who can be really intriguing to follow because he’s such a phenomenal athlete. You never know what he’ll become.” Mel keeps a few surprises close to the vest to keep you off guard.  With insider information like that, why wouldn’t I just send ESPN all of my subscription money?

Anyway, Stoops believes Dupree is just as good standing up at outside linebacker as he is with his hand on the turf as a defensive end.  Much of that is murky in the NFL these days anyway, as teams start adding to what they already have.  Defense in the NFL is very personnel oriented. So how good  was Dupree at UK?

First, he was named All-SEC.  That, in and of itself, puts Dupree in a special class of Kentucky football players.  Dupree joins the punter, Landon Foster to be named All-SEC in 2014.

The Wildcats named all conference over the last 10 seasons:

The 6’4, 264 Dupree finished in the top 10 in the SEC in sacks for 3 straight seasons.  He is strong, fast, and has a knack for the big play.  Looking a little odd in the #2 jersey, the reason behind wearing that number is simple: “If I want to be No. 1, I always have to work like I’m No. 2,”  Dupree said about his jersey number earlier this season.  Dupree finished 2.5 sacks short of being UK’s all time leader in sacks.  That is a pretty amazing fact once you consider where the UK defense has been in the last four seasons.  There haven’t been a lot of reasons for opponents not to double up on Dupree in key situations.

Dupree is capable of bringing a lot of violence to the point of collision but then can also make plays like this in key situations:

If the last four seasons would’ve seen a few bowl appearances out of UK, I think we would be hearing a lot more about Dupree.  But the truth is, if you can play, they will find you.  Mark Stoops has coached 9 first round draft picks. I’m with him on this one.  Dupree leaves UK as one of the top three or four to ever play in Lexington.